Why ‘The Baddest’ Album Launch Meant So Much To Kenyans

L LSeptember 17, 2018Comments Off on Why ‘The Baddest’ Album Launch Meant So Much To Kenyans0

This past Saturday, September the 15th, Swabri Mohammed aka Redsan launched his latest album at a venue that was definitely instrumental in setting off his career almost two decades ago – the Carnivore Grounds.

The event dubbed “The Baddest” had so much hype that for a while everyone seemed to be on one positive wave. Kinda like how it felt after we clinched the top spots in the Berlin marathon this weekend. Part of the buzz was due to who was performing, it was such a treat to have acts from Kenya, Jamaica and Nigeria come together.

A whole lot of people came out to support. The regular section seemed to have had a pretty young crowd while the VIP was packed with a majority of us who grew up listening to Redsan’s music. The young folks bumped and sang along to each and every one of Khaligraph Jones’ tunes. They couldn’t get enough of him, considering he’s one of the most booked artists this year. Demarco was next and we appreciated the energy and engagement. No other performer used the crowd as much as he did. He was having so much fun, we had to remind him we were waiting for Tiwa and Redsan. 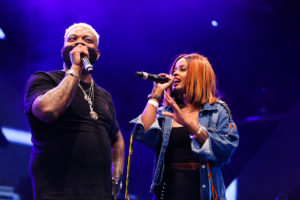 Then Tiwa came to pour her heart out to us – such a pity she just tweeted this morning that they were screwed over by the promoter – the whole event may just as well have been, The Savage Tour. 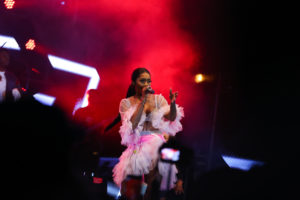 Right after Tiwa, an emotional Redsan emerged. “This is the first time I have ever been nervous on stage… I am who I am because Kenyans are behind me.”  So heartwarming. He then proceeded to perform his major hits and the dancehallers had a mini work out as they ended the night. 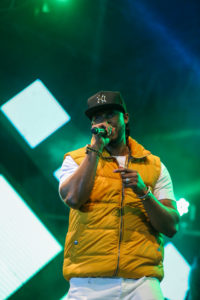 Special mention to Amina and Njugush who were the MCs and DJ Wesley and Kris Darling.