The Safaricom Youth Orchestra launched in April 2014 by the late CEO Bob Collymore is an exciting musical project that brings together young talented musicians from all parts of the country. These young musicians aged 10-17 are mostly known for their stellar performances in the acclaimed Safaricom Jazz Festival, alongside notable names and world-renown artists.

Many wonder what the elusive life of a member of the Safaricom Youth Orchestra looks like. Kenyanvibe got to catch up with an alumni of the program for an in-depth dive into how the SYO impacted her life.

Michelle Oguya is a SYO alumni who currently studies BCOM at Strathmore University with a major in Marketing. With the experience she got from the SYO, she’s gone ahead to start an Orchestra at the University. She takes us through her journey in vivid detail. 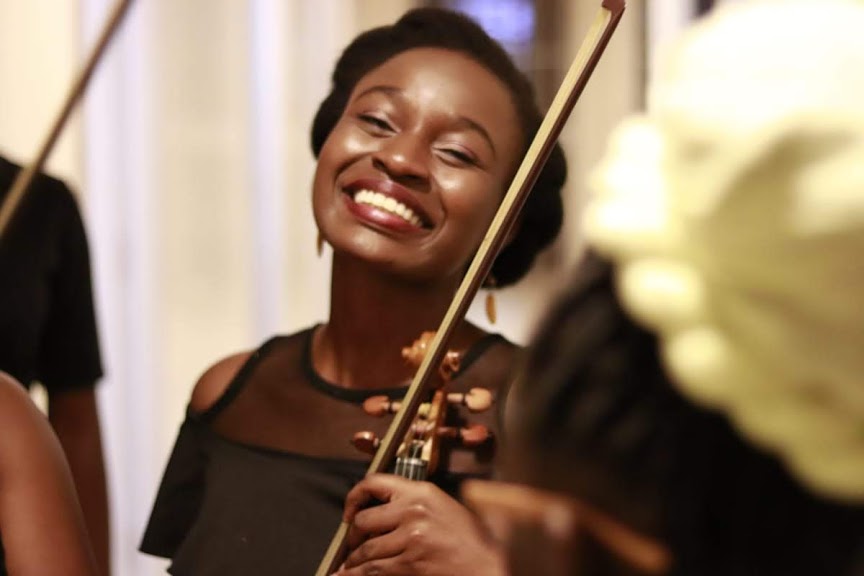 How did your life path merge with SYO initially/ how did you initially get into SYO?

I was a member of the Kenya National Youth Orchestra (KNYO) and so I was invited by SYO (I was part of the initial class) to come and play for the guests. As I already had knowledge on how to play an instrument (piano and recorder), I was invited to audition along with my brother. I played with a quartet from my church and the rest was history and that’s how I got into SYO. My primary instrument at SYO is the violin.

Has music always been your thing?

I started music before I was 7 years old. I focused on music because I felt it was the greatest way you could express yourself. (I also tried a few sports, drama and other extra circular activities). Music makes me connect with my immediate feelings. Hence I can get rid of negative emotions and harness positive emotions.

I got into music through church. A missionary from the USA – Joan Judd, visited our AIC church and trained a few of us on music. She goes around the world starting orchestras and donating second-hand violins that she has received in bulk. Hence, once the orchestra is up and running she moves to a different country to continue the same work in a duration of 3-5 years. When she was in Kenya she was here for much longer than that and I learned a lot from her. When I moved to the Kenya National Youth Orchestra I learned from Marta Lizak Fred Pessa. And from SYO I learned the violin further from Brian Sempele and David Ralak.

What was your role at SYO?

I was the first concertmaster at SYO with my brother. When I went to high school, my brother took over and I returned from 2017 -2018 then I graduated in 2019 from SYO.

As a concertmaster, you make sure that the orchestra is focused, you have to tune everyone before practice to make sure they’re playing together. Everyone looks to you for the direction on how to align the bows as they all need to be facing the same direction. 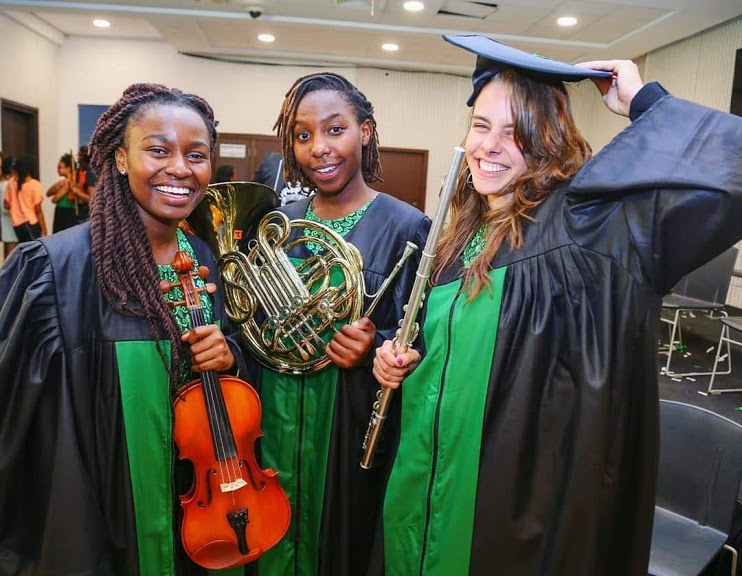 What is one of your biggest achievements while at SYO?

Being a concertmaster for SYO was amazing its part of my biggest achievement. Playing with Jimek was the most fun I’ve had in orchestral history. He composed Hip Hop history 1, 2 and 3 and when we played it at the Safaricom Jazz Festival that was one of the most exquisite and fun opportunities that I’ve had to challenge the barriers of orchestral music and classical music. My third is being able to touch so many different lives and hopefully inspire others.

What were the biggest lessons you learnt while at SYO?

One thing is that music is a movement. It moves everyone to conform or to learn about themselves or someone else in the same area. You have the opportunity to interact with so many people at the same time. Music has made us interact we normally would not have talked to. It challenges introverts and also I got to interact with older people such as David Ralak and Bernadette.

Second, the importance of practice. Whenever you do something a lot, the law of 90/10 comes in. Whatever you do a lot you will become good at it.

Third, the barriers are not really there. You can always challenge yourself to traverse them. And you may find that they are mental.

What was the biggest challenge for you?

In the orchestra, the string section is split into different parts (first and second violins, violas, cellos, and double basses). We had this one section in this piece – Franz von Suppé : Light Cavalry – Overture, There’s this one page at the end that kept giving me a challenge. It was the fastest bit I’ve ever played at the time. No matter how much I practiced, it took such a long time to get it. The day before the concert, that’s when I understood and played it without looking at the music. My fingers actually moved in time and speed with the bow. The technicality of a piece can challenge me sometimes and aside from that, everything else was fine.

How has life been after SYO?

I surround myself with music from the Conservatoire to KNYO and hopefully in the future the National Youth Orchestra. During the week there’s the orchestra at Strathmore University which I developed with two friends – Mugambi and Claire whom I practice with. We were playing with the choir before the pandemic and we were even planning some trips. During the weekends I continue to practice with the Conservatoire and KNYO. In the past 3 weeks with KNYO at 10, we came together and recorded different sections that have been mixed and mastered to make an actual online performance. KNYO at 10 is going to be fun. Then there have been posters asking for submissions for musicians to submit their work for the upcoming public holiday and we have been involved in that sending as much music as we can. That has kept me busy during the pandemic.

Also, I teach on zoom and I have 4 students. I’m teaching them the violin. It’s been pretty interesting.

How did the experience at Safaricom Youth Orchestra shape you as a person?

It made me a better leader. Learning to interact with people from all sorts of dynamics – 8-4-4, IGCSE, people who came in just to play. This helped my social skills. Another way it shaped me is it helped me to further broaden and strengthen my character and not take everything so seriously. Classical musicians are typically perfectionists and take everything very seriously.

The mentorship (from Bob Collymore) and I made very good friends who I’m still in touch with now even if they are not all in the country at the moment so we met on Zoom. Great experiences and it made me open my eyes to the realities of the world. 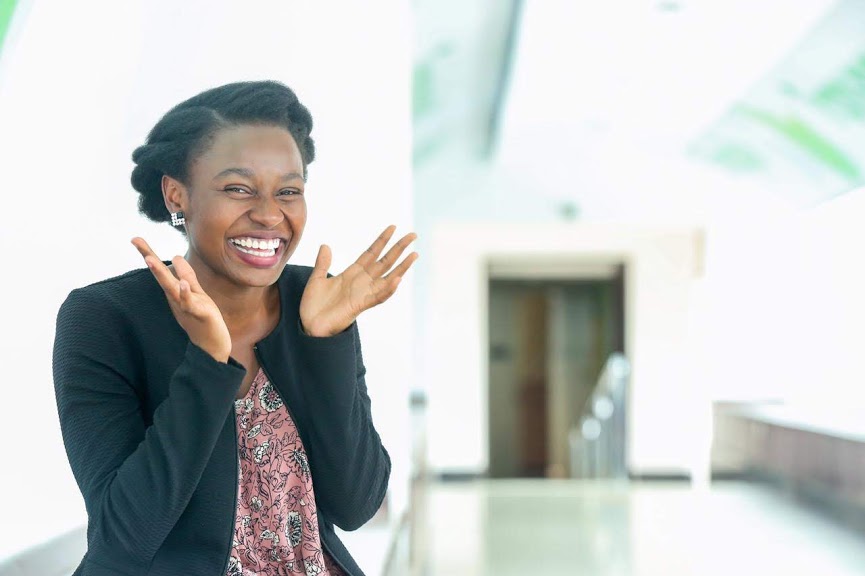 If you were to do it all over again, would you change anything?

I wouldn’t change anything. I’m 20 years old and I wouldn’t. I believe it’s important not to regret stuff. I guess I would try to spend more time with people. Really get some roots with some of the tutors because of what the pandemic has done for us and taken that time away.

What do you do now and how are you using what you learned to impact the community or society?

I am involved with the Kenya Model United Nations. We have been working hard to enrich people’s lives during COVID-19. We’ve been reaching out to all these organizations and vice-versa for them to provide relevant talks to the students since school is currently paused.

I’ve worked with organizations to organize sanitary towels to send to ladies who are unable to purchase them. It’s not fully operational at the moment. That’s something I did end of last year. What we need is support from other organizations and consistent donations to make sure we are able to fully support the ladies in need for longer.

Watch! Otile and Ali Kiba Team Up For New Song Dubbed “In Love”