If you have not been to the Kenyan theatre stage, then you really are missing out on some fine talent that cracks your ribs instantly and spontaneously. September 2nd the Prevail Arts Company presents a new play titled ‘Cords Of Discord’ and they promise it will be a pulsating presentation to take your breath away. 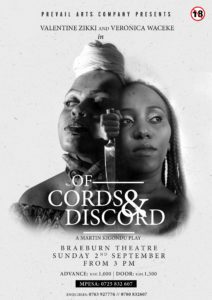 Directed by the legendary Martin Kigondu and produced by Wanjiku Mwawuganga (who was on Too Early For Birds production), the play is a dark-humoured thrilling drama that explores the level of strain family relations can hold: from the cords of siblings to those of couples. When is the rhythm lost to let in the missteps of discord? 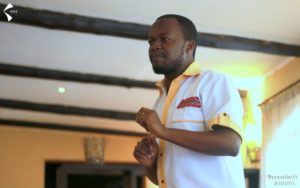 Martin Kigondu at What Happens in The Night (Nanyuki) 2017

There has been a noticeable rise in the number of crimes of Passion reported on the news from different parts of the country. The interesting bit is, are we shown the entire picture? Who is the real victim and what circumstances make them so? Could it be the Social class, education levels or prominence factors that could lessen the crimes?

The play is starred in by Valentine Ziki (Jane) and Veronica Waceke (Joan) who are sisters and a predicament befall them forcing the two to spend time together which is followed by horrifying discoveries.

The play will show on 1st and 2nd September at Braeburn Theatre Gitanga Road and Le Rustique Nanyuki.