Maureen OolaJune 30, 2020Comments Off on The Safaricom Youth Orchestra is More than Just a Musical Project – Levi Wataka2

KenyanVibe recently linked with Levi Wataka who is the director at The Safaricom Youth Orchestra (SYO). The Orchestra, a musical project launched by the late CEO Bob Collymore in April 2014, brings together more than 70 Children aged between 10 and 18 years from diverse backgrounds.

For Levi, his work is more than just teaching music to these youngsters but also helping them achieve their dreams. KenyanVibe had a candid sit down with him and he shared some deep insight into the relevance of the project; what it means to the students and the society at large.

Tell us about your role as SYO director

The Orchestra has three major things that have to happen at the same time. It’s got a massive adminstrative role for everything to be in place for one rehearsal to happen there are so many things that have to be coordinated administratively. Getting the room set up for the right number of people, getting the right instruments available, having the library running because everybody has to have music for what’s going to be played that day, all the teachers have to be poised on what they need to train and the team that sorts out meals and stuff. So my job oversees the more hands-on administration of that. So the director gives an overview of what needs to be achieved.

Anyway, that’s a summary of the administrative work then there’s the musical work which is conducting the orchestra, now that is what my actual profession is. So once you get into rehearsal you have to run the rehearsal and make sure everything is in place that the music is happening.

Then the third part is the organizational part so this is where we have to fit in whatever we have into what Safaricom’s vision is. And then supporting with the ideas for the best way to implement – and that also involves our relationship with the community, the wider community so we have to figure it out from a communication perspective.

What’s SYO’s vision and how does it tie in with Safaricom’s overall vision and mission?

Yes, our mission and vision came from making music available to people in Kenya. Making quality music available to young people who otherwise wouldn’t afford it. The important thing which guess is hidden sometimes is the difference between music in education essentially and entertainment. We are not getting people good enough so that they can go and make pop music although that’s a clean option for them if they want to. But what we are doing is investing more in the community aspect of what music means; people coming together and developing a high enough level of discipline.

Being a member of an orchestra or a sports team and practicing it is different than reading it in a book and saying I understand. That’s living it. If you are in your teenage years and you start experiencing success from your own effort it’s a different kind of education than if you are really really brilliant and then you go for an important talk by a great speaker and hearing what teamwork means. It’s doing it and that’s why Safaricom came on board and over the years we have noticed Safaricom’s big messages are usually to do a lot with the community. Things like Twaweza, or Yes We Can together, there is a big community aspect to that. I guess in a way we sort of feed into that or in many ways translate that into practice. 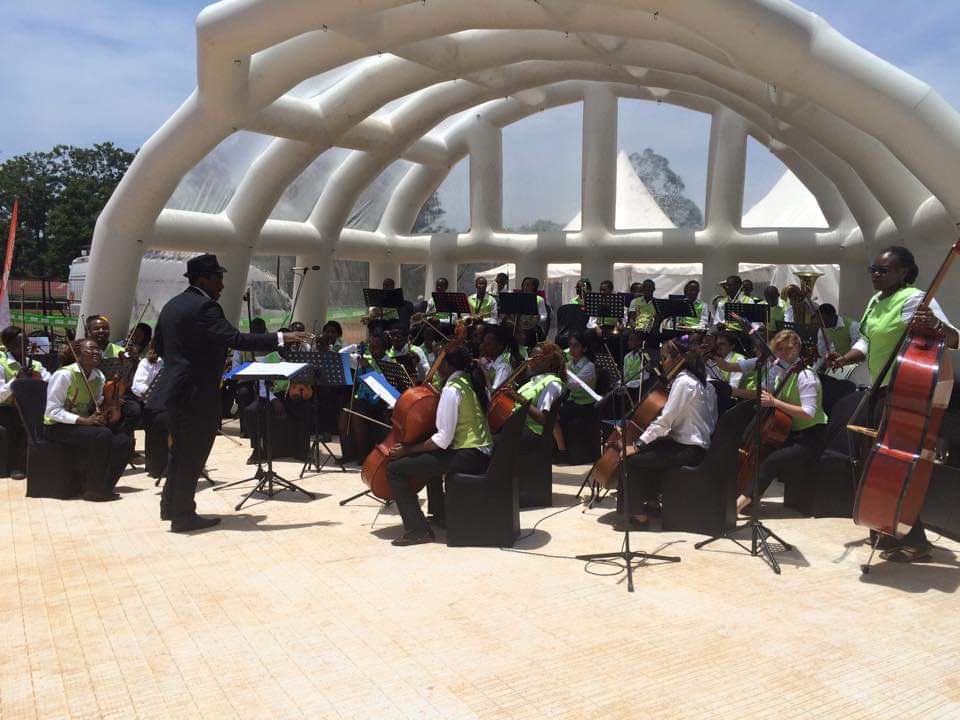 SYO recently launched an e-learning platform. How is that so far?

It’s going well. I fill like we should get away from the term e-learning to virtual rehearsals. The reason being e-learning is a really broad term. If you say e-learning it disappears into a big sea of what’s happening across the world. There’s a specific challenge to orchestral rehearsals, we are figuring that now. But yes we have started that recently.

So far it’s exciting. The first problem we had to solve was connectivity because a lot of our work has always involved providing some community support to our members so they are able to attend music classes. In regular life before Covid, there was a section of members that benefited from a little bit of community support, sometimes food, school fees, or little things like that to get them ready. And so obviously there was connectivity issue and thanks to Safaricom they were able to provide devices and connectivity to a lot of the members and then now we had to agree on a module of how that would work. The majority of orchestral work is collaborative in real-time, we are now working with the tutors and they are doing a great job in inventing ways that we can communicate musically together.

What are some of SYO’s success stories?

That’s a very exciting thing. Some of the direct outcomes are the people who have really enjoyed and excelled in doing the music. We’ve got a couple of players who’ve come through to then being tutors in the orchestra.

Now, how that worked is at the beginning there were some instruments that were rare in Kenya generally so we had to look for someone and say here is an oboe, here is a bassoon, we don’t have people playing this so we clearly don’t have many teachers of it. And so this person did really well on that instrument so that they are now the oboe, tutor for the Safaricom Youth Orchestra

By doing that they are now equipped to teach obo. Since we meet on Saturdays they are now able to teach the obo around Nairobi to schools. So those are musical successes which have also happened for the instruments you don’t see very often.

There’s a lot of orchestral that you don’t see that has really opened up and it manifests in the schools. A lot of the members come from schools so if you visit a lot of schools that are represented by Safaricom youth orchestra you see that it’s really good quality bands led by these guys.  It’s happening across the country. So that’s a direct musical success story and there’s, of course, individual success stories. People who have gone into universities to do music in the US, SYO members  and we have people who have gone not into music but they are still playing music, they have gone into medicine and law and other courses but music  continues to be a part of them

What do you love most about your job?

That’s hard to put in words. I usually say I don’t teach music, I teach through music. I teach sports as well. I’m equally passionate about both and we don’t do it through music

When you are doing music there are other life lessons that you get to experience together. We get to experience, empathy, discipline, community, and achieving those things is what I love most about it.

What do you foresee for the Kenyan orchestral scene?

As I was telling you earlier about the difference between music as we do it, music for education of the community and then music . One of the things we must achieve is starting to contribute to music in the auditory sense as well. We’ve got some really good quality in Kenya. I saw the other day Sauti Sol are on the world stage. And what we want to do is get to that level of music but with a 100 people. If there’s four or five of you are practicing every day you get really tight. But to just mobilize 100 people to practice once a week it’s massive. Now for that level of music to still play at a level that can be sold on the world stage. This is where we have to go, we have to try and get to that level of top orchestras in the world. Top youth orchestra. And we have seen it possible in Venezuela and in other poor countries who have explored how to do music in community. So that’s the first thing. We’d like people to know that you can hire an orchestra and it will be equally good quality music.

One of the ways that’s going to happen is through film music. If you enjoy Lord of the Rings if you enjoy any film, a big part of any film is the orchestra. And a lot of our Kenyan films in the last 5/6 years. If you watch Nairobi Half-Life a very good Kenyan film, and in the end, you see the name of the orchestra, it is a German orchestra.

We have been trying actively reaching out to producers and saying it’s time to record orchestra here and the producer said to us. You know what, we go to Germany and these guys are good, we get in there they record – and they are top-notch. So that’s our challenge.

Any word of advice for people who want to get into orchestra or music in general?

The first thing is you have to give it time. I’m sure you’ve have heard in any music interview: Practice. You got to practice. You have to say what you love about it, and you have to have something more to say than the music. The music has got to be the vessel in which you bring out something that’s in your heart. So technically you could get your fingers to do marvelous things on the piano. But it will never move anything unless it’s coming from your heart.