If you’ve ever been on any one of those loud matatus to or from Rongai, then you understand why Tunji just had to make a song about it and say that, “Mat za Rongai ni zii…” While he meant that they’re the baddest matatus in Kenya, which they are, I like to think that he also meant ‘Nah, stay away from them.’ Once you get on a nganya matatu to Rongai just know you’re in for a ride. From being noisy as hell inside which is entertaining if you’re into that kind of thing, to being super fast and overlapping, nganyas from Rongai are just… Special.

While still pursuing an undergraduate at Multimedia University, Rongai, Tunji’s love for music couldn’t keep him away from the booth, despite him stating that balancing school and music has been a challenge.  This led him to record a song inspired by his immediate surroundings, Mat Za Ronga.

The heavy trap record quickly became a sensation across Nairobi because of it’s easy to remember lyrics and repetition. In case you haven’t heard the record, heard you go:

On Saturday night/early Sunday morning, directed by Richie G and Ivan Odie (Callivan Studios), Tunji shot the music video to “Mat Za Rongai” featuring some of  the hottest nganyas including Phantom (also mentioned in the song) and MacBully. 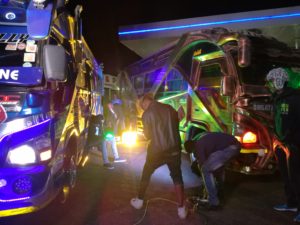 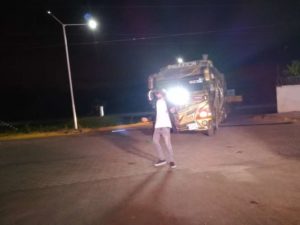 “Ivan Odie and Richie G came through with some great directing and I feel like it came out nice,” explains Tunji, adding that he loved the energy and vibe of the crowd as well. Although there is no release date for the video at the moment, Tunji says that he’ll keep us in the loop.

Random Facts: Here's What You Didn't Know About Raj! Previous post
Is Khaligraph Jones Bleaching His Skin? Next post