Turning 30 is a big deal. Your life doesn’t magically change – but there is a certain inferred significance to the date; that you’ve left the slacker years behind and now really need to get serious with life.

Not that Sauti Sol’s Savara is a slacker. He is as far from one as anyone possibly could be – spending his entire 20s following his passion, perfecting his talent and ultimately growing (along with his crew) into Africa’s foremost musical group.

So what happens when he turns 30?

He’s reaching for a new challenge.

Savara has just launched his imprint community initiative dubbed #SaWA (Savara Women’s Advancement Program) which will be rolling out a series of community events and projects over the upcoming weeks. This will include a football tournament, Sauti Sol’s first mega concert in Eastlands and the launch of a training and mentorship program for young ladies. 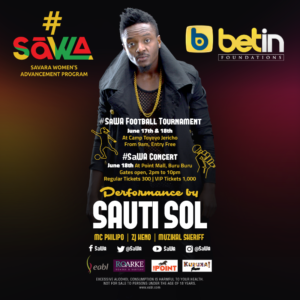 The SAWA Community Football Tournament will be held at Camp Toyoyo JERICHO. The tournament is a 5-a-side set up with a total of 20 teams of 5 players above the age of 18. Every team will have to have at least two women and will be competing for amazing prizes. It will also be the first time in months that Savara is playing football following his recovery from leg surgery. After the tournament, there will be an after party hosting Sauti Sol’s first concert in Eastlands at Buru Buru’s At Point Mall. ZJ Heno and Muzikal Sheriff will be performing at the event.

The culmination of  #SaWA will be the pilot phase of a community ladies’ training and mentorship program that will recruit 50 ladies between 18-25 years from the Nairobi Eastlands area.

Here’s to the next phase of your life, Savara: the dirty thirties!