‘We Run This’ – A Clothing Collection That Helps Feed Kenyan Students

Cole SummerJuly 30, 2017Comments Off on ‘We Run This’ – A Clothing Collection That Helps Feed Kenyan Students0

From afar, it looked like the boy was piggyback riding on his friend.

But it dawned on Chris Cooper that something horrible had happened when adults, screaming in Swahili, rushed towards the two children in panic.

“The kid that was carried was dead on the other kid’s back,” Cooper, the British founder of food charity organization Runners Heal, told KenyanVibe on Saturday. “This was day one in Kenya.”

Cooper, 31, witnessed the tragic scene when he traveled to the impoverished Kerio Valley in western Kenya this past April. The trip had been planned as a one-time vacation, but the memory of that young boy, dead on his friend’s shoulders, left an indelible imprint on Cooper.

“When you see that on day one, it no longer becomes a vacation,” he said. 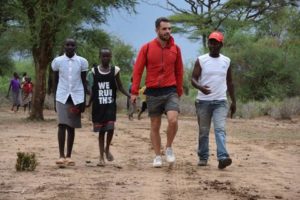 Chris Cooper (second from right) with students at Songetto Primary.

On the flight back home, Cooper began brainstorming ideas to combat child starvation in the Kerio Valley, a notoriously arid area where water is scarce and food cultivation difficult. A few weeks later, Runners Heal was born.

Runners Heal uses profits from its “We Run This” t-shirt collection to help schools in impoverished areas feed their students. The t-shirts come in various designs and each sale guarantees one month’s worth of school meals for one student.

In its first month, Runners Heal provided nearly 30,000 meals to students at the Songetto Primary in Iten and also used proceeds to foot hospital bills for several destitute locals in dire need of care.

“A lot of the food from (the World Food Program) doesn’t actually reach the schools,” Cooper said. “So what tends to happen is that the food for the older kids is split between everyone at the school.”

In addition to direct relief, Runners Heal helps schools establish and run their own farms. Earlier this month, the foundation for the Songetto Primary farm was laid down.

“In the long term, the kids will be able to grow their own food,” Cooper said. “They’re taking responsibility, which is really important.”

Cooper – who describes himself as an “average guy who likes to keep fit” – decided to center his food security initiative on running in part because he’s a runner himself and in part because Kenyan runners are the best in the world.

And the concept is gaining traction among Kenya’s finest athletes. 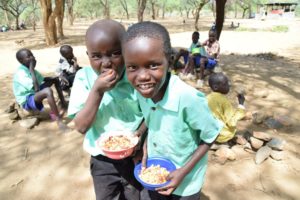 Mary Keitany, the women’s marathon world record holder, recently invited Cooper to dinner at her home in Kenya after hearing about Runners Heal. She commended Cooper on spearheading the Songetto initiative and told him that she would be donating food to the project shortly.

“Thanks Chris Cooper, may God bless you so much for your real support to this community,” Keitany captioned a photo of herself with Cooper.

With the Songetto Primary farm up and running, Cooper is going back to the Kerio Valley in August to help another school cultivate a farm.

The long-term goal of Runners Heal, Cooper said, is for the schools to become self-sustainable, so that their students can focus on education rather than survival.

“A lot of kids don’t have any food at home and many of them go to school just for that one meal,” Cooper said. “Hopefully, we can make school about more than that.”