Just months after veteran musician Nonini quit his role as the Chairman for Performers Rights Society of Kenya (PRISK), he has scored a major deal from Safaricom.

The 35-year-old Genge artist has been appointed as creative brand ambassadors for the telecommunication giant. The partnership will have Nonini heavily involved in Safaricom brand campaigns which will include the use of his image, voice and content.

The deal is only six months long.

“I appreciate this chance to work with Safaricom and also look forward to learning more about the work Safaricom Foundation does. I am very passionate about Corporate Social Responsibility, and as part of the partnership I hope to participate in as many activities as I can,” said Nonini.

Safaricom Acting Director Charles Kare said the company was glad to have such talent on board and will see that their partnership will open several doors for Kenyan entertainers. 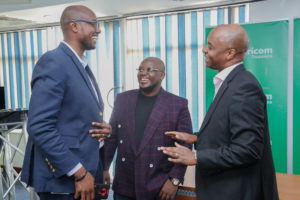 “We settled on this partnership with Nonini because he is a pioneer of new-age Kenyan music popularly known as Genge, is passionate about artistes’ rights through his involvement with PRISK and other organizations that fight for artistes’ rights. His passion for helping those in need goes in line with our brand spirit of Twaweza and we look forward to working with him on various projects,” said Charles Kare.

The deal will also see Nonini educate his fellow artistes on monetizing their songs and creative endeavours by registering and joining SKIZA.

A few months ago, Safaricom and Nonini locked horns after the Genge singer accused the company of using his ‘Gigagagaga’ lyric without his consent.

Nonini said that Safaricom, through agency Scanad Africa, approached him to use the lyrics but after getting a quotation from him, Scanad said they couldn’t afford the amount; only for him to see it later on in their “1GB data bundle valid for 24 hours” advert.