Kenya Sevens players will be affected by the new World Rugby rule banning any message on straps.

World Rugby confirms introducing rules which ban players from writing messages on strapping worn on their wrists in matches in the Sevens World Series.

Kenya’s Frank Wanyama is known for his popular ‘Webuye’ sign on his arm strap. 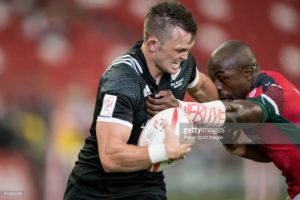 Players attending Dubai 7s expressed their frustrations saying they had been warned they could be fined up to $1,000 for breaking the rule which bans the appearance of any messages – personal, religious or political – on strapping tape.

According to reports it’s all about falling in line with Olympic policy — no individualized slogans, symbols or messaging is allowed — as well as arguing that an expression of religious conviction, personal support or other forms of solidarity might seem fine to one team, but not to another.

Also, after pointing to the global nature of the TV and stadium audiences, there’s concern on the part of organizers that such messages might cause unintentional, let alone intentional, offense.

“There has been a significant increase in strapping art or messages in the series in recent seasons which is impossible to police for inappropriate or political statements by the match officials in the short period of time before entering the field in a sevens environment across multiple matches and in multiple languages,”

World Rugby said in a statement. “While World Rugby recognizes that the overwhelming majority of the messages are appropriate and that is something that the players enjoy doing, there have been a small number of occasions where messages have gone unchecked and caused offense to teams, nations, commercial partners etc.

“This is a common-sense approach that has been accepted by all participating teams.”  of athletes that do it, there is nothing wrong with what they write.”

All Blacks prop Kane Hames was censured last year for writing a message on wrist strapping which supported Native Americans protesting against the routing of an oil pipeline through tribal lands.

Soulful Kick Off To December, With Lahani! Previous post
Check Out Which 254 Artists Lead The Way With A Million Views On YouTube In The First Month Next post