Lupita’s New Gig Revealed – And It’s a Big One!

Della MbayaFebruary 22, 2018Comments Off on Lupita’s New Gig Revealed – And It’s a Big One!0

The hype from the release of the years most anticipated film “Black Panther” isn’t even nearly over, and now Lupita Nyong’o has scored herself a lucrative new role – a feature in the upcoming film adaptation of Trevor Noah’s bestselling autobiography “Born A Crime”. 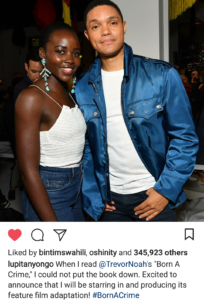 According to showbiz reporter Deadline, Nyong’o will play Noah’s mom, Patricia, who served as an important figure to her son in his formative years. She was shot in the head by his stepfather while returning from a church service in 2009, but survived.

Trevor Noah is producing the project through his Ark Angel Productions alongside Norman Aladjem, Derek Van Pelt and Sanaz Yamin of Mainstay Entertainment, and Lupita herself.

Released in 2016, the book has spent 26 weeks on the bestseller list and has won the James Thurber Prize for American Humor and two NAACP Image Awards.

She’s had a pretty big few years, and that’s not going away anytime soon. She is also set to produce and star in the onscreen adaptation of Chimamanda Ngozi Adichie’s bestseller Americanah.