Lupita to Star as Stunning ‘Undercover Spy’ in ‘Black Panther’

Cole SummerJuly 13, 2017Comments Off on Lupita to Star as Stunning ‘Undercover Spy’ in ‘Black Panther’0

The highly anticipated “Black Panther” movie will feature Lupita Nyong’o as an African superwoman boasting James Bond-like cunningness and street smarts, according to an eye-opening report on the film’s characters.

In an extensive Entertainment Weekly cover story released Wednesday, we’re given an inside look on the big-budget Marvel franchise – the first large-scale black superhero comic to be made into movie.

Spectacular photos of the main characters in full custome, along with descriptions of their traits, are on display along with quotes from the cast members.

Lupita will star as “Nakia,” a stealthy agent for the film’s fictional Wakanda nation. She also doubles as the former lover of “T’Challa” – Wakanda’s king and the film’s lead character (played by Chadwick Boseman).

“She is a departure from what she was in the comic book,” Lupita said of her character. “Nakia is a war dog. She is basically an undercover spy for Wakanda. Her job is to go out into the world and report back on what’s going on.”

Boseman agreed with Lupita and described Nakia as a “very strong” woman in “a very matriarchal society.” 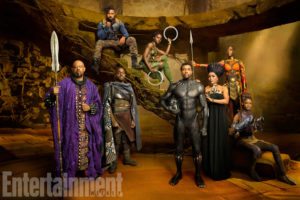 Lupita in the upper middle (courtesy of Marvel Studios and Entertainment Weekly).

Nakia wields a set of traditional African weapons that the directors have dubbed “ring blades.”

Executive producer Nate Moore explained that Nakia boasts the circular weapons only while in her green outfit.

“However, she does get a hi-tech upgrade later in the film,” Moore said without further deliberating.

“Black Panther,” which is revolutionary in its genre for having a 90% black cast, will hit the silver screen on Feb. 16. We will keep you posted on any and all updates about this spectacular-looking film as we eagerly wait.