That Lupita – Rihanna Movie? Looks Like It Could Be On

Della MbayaMay 22, 2017Comments Off on That Lupita – Rihanna Movie? Looks Like It Could Be On0

The Internet is clearly the most powerful influencer out there.

A month ago, we couldn’t stop buzzing about the possibility that Rihanna and Lupita could possibly stag in a film together, penned by Issa Rae and directed by Ava Duvernay.

And it was this meme that got it all started. 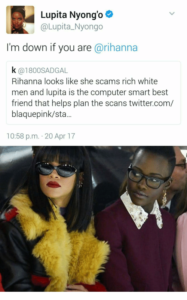 Yes. A picture of the two artists sitting together a couple of years back at a fashion show.

The two stars both gave it their backing via their various social media accounts and Netflix has allegedly jumped on what could be a ridiculous coup for them – whether it gets trashed by critics or not. 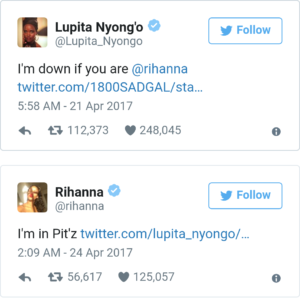 According to Entertainment Weekly:

“After dramatic negotiation session at the Cannes Film Festival, Netflix has nabbed a film project pairing Grammy winner Rihanna with Oscar winner Lupita Nyong’o, in a concept that began as a Twitter sensation. Ava DuVernay (Selma) will direct, and Issa Rae (Insecure) is in talks to write the screenplay.

According to sources, Netflix landed the project in a very aggressive bid, beating out multiple other suitors. Netflix had no comment.”

So no comment from Netflix as yet, but we are crossing all toes and fingers that this could actually be a thing.

A heist flick involving two of our favourite A Listers?

We’ll drink to that!