The talented artist shared the good news on her social media pages informing that she was recognized as a Young, Gifted and Black ( @ygbawards ) entrepreneur.

According to Sheila whose talent is highly praised in the Kenyan circles, this win is one of a major milestone considering that she was the only child and the only African to be nominated for this award.

The artist came to the limelight years back after she was featured by BBC and other media platforms in Kenya where she showcased her works. 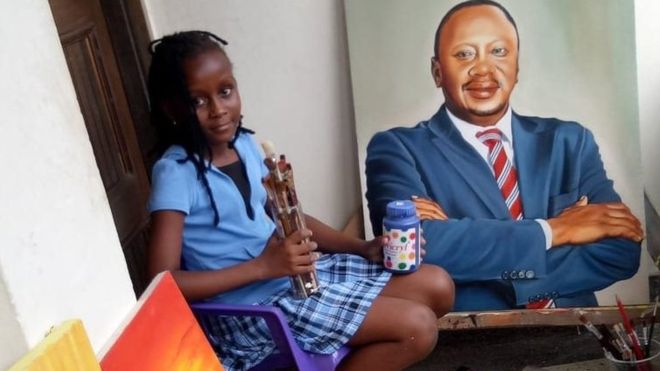 Some of the artworks she has done are portraits of politicians like Mike Sonko, Joho, Raila Odinga, Uhuru Kenyatta and other presidents in East Africa.

The award-winning artist also thanked all those who played a part in helping through her achievements as she dedicated the award to Dr. Mavin Wagiuko who discovered her young talent and encouraged her to pursue Art.

The recently received award counts as her third International award after Youngest Lioness 2018 and the Global Child Achievers 2020.

With her talent earning international recognition, Sheila confidently says that she is proud to represent Kenya and aims at raising the county’s flag higher and beyond.