Nairobi-based graffiti artist WiseTwo has gained international repute as a fearless pioneer who never backs down from a challenge.

So he didn’t have to think twice when a prominent art gallery director recently approached him about painting two murals in his home city that would become the largest of their kind in East and Central Africa.

WiseTwo, whose real name is Bhupi Jetwa, finished up those murals last month after two straight weeks of 10-hour workdays.

“It’s a humbling feeling,” WiseTwo told KenyanVibe on Wednesday, adding that even though his murals broke the regional record, “something keeps telling me to keep pushing the boundaries.”

The massive murals adorn the front and back facades of the IBIS Styles Hotel in Nairobi’s Westlands neighborhood. For WiseTwo fans, the aesthetics are familiar: intricate facemasks in bright and explosive colors imposed over deep, vivid backgrounds, evoking traditional tribal elements as well as contemporary complexity. 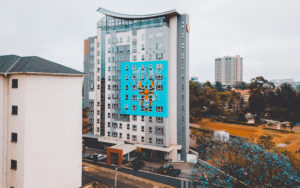 One of the murals that now adorn the Ibis Styles Hotel (all photos by Asif Khan).

The mural designs were inspired by two canvases WiseTwo exhibited at a solo show in Paris two years ago. He perfected the designs over the course of two months, drawing up numerous mock-ups before finally finding what he was looking for.

Each mural is 15 meters wide and 15 meters tall and both hover 35 meters above ground. To complete the staggering pieces, WiseTwo recruited friend and fellow graffiti artist Kerosh.

“Without him it would have been tough,” he said. 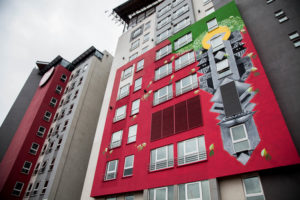 “The adrenaline rush was amazing,” he said. “Every time I went up on the cherry picker the energy was just accurate and made me feel this is why I do what I do and I would never change my path for anything or anyone…And of course seeing Nairobi that high up was a beautiful feeling.”

Life on the road is second nature to WiseTwo so, just one day after finishing what are now the largest graffiti murals in East Africa, he traveled to Uganda for another project.

And he’s not looking to stop any time soon.

“There is so much more I have to paint,” he said.