Kenya 7s has had a fantastic day one at the Dubai 7s qualifying for cup quarters to be played on Saturday.

The Innocent Simiyu side will play New Zealand in cup quarters from 10.44am on Saturday.

Kenya 7s finished second in pool A after beating Uganda and Canada and losing to South Africa while New Zealand topped pool D after wins over Samoa, Argentina and USA. 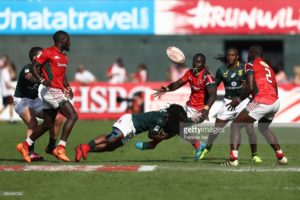 Uganda’s tries were scored by Kenyan based Solomon Okia and Philip Wokorach with the Kabras Sugar fullback converting both. 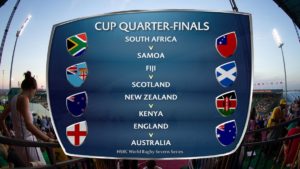 Dennis Ombachi started the game off on the right note flying in under the posts. However, he looked to have badly injured himself in the process of scoring.

He is likely to miss day two of the Dubai 7s alongside Collins Injera who missed the win over Uganda.

Kenya 7s did not carry the 13th player to Dubai meaning they may have to recall a few going to Cape Town next week.

Cecil Afrika, Branco Du Preez, AS Smith, Justin Geduld and Rosko Specman scored for the Bliztbokkes with Senatla bagging a hat-trick as they beat Kenya Sevens.

Their four conversions were made by Afrika and Preez who completed two each other.

The Blitzboks, who are the Dubai 7s defending champions, take on Samoa as England plays Australia and Fiji play Scotland.

Nick Ndenda Back On Radio A Year After Kiss 100 Exit