Kenya Sevens is banded in pool B of the seventh round of HSBC World sevens series, Hong Kong sevens set for Apr 7-9, 2017 in Hong Kong.

Kenya, who bowed out of Vancouver 7s at the challenge semis, will play on-fire and series leaders South Africa, Canada and France. 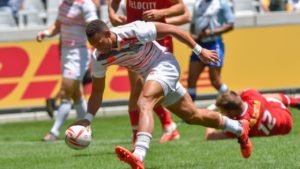 Speaking upon arrival in Nairobi from Canada, head coach Innocent Simiyu was contended with Hong Kong 7s pooling saying the stand a chance.

“In Hong Kong we have a good pool, for us, the key thing is we have to qualify. The teams we have to play are all on the jam in the league and any good performance against two of them can lift us to top 8.”

South Africa have reached all cup finals in the current campaign winning four out of them and has only lost to England, not once but thrice and drawn once still with England.

France have however performed below par as far as their last season’s campaign is concerned.

“It is something we have to take into consideration and hope our performance can go up there in Hong Kong and Singapore,” he added.

Norton and Injera tie at 244 tries and all eye will be on the two stars on whether Injera extends the lead or Norton makes a new record. This is expected to continue all the way to London 7s as far as the two players are active.

Vancouver 7s champions England are seeded top where they will play Australia, Samoa and invitational side South Korea as defending champions Fiji headline pool C to take on New Zealand, Wales and Japan.

254 Throwback: Here Are The Ladies Still Running The Game Previous post
Hottest Releases In The 254 Music Scene Next post