Kenya Sevens ended the seventh round of HSBC World Sevens Series, Hong Kong 7s on a low note losing 21-19 to Scotland in the challenge trophy final on Sunday Apr 8, 2017.

Frank Wanyama and Dennis Ombachi had given the Innocent Simiyu boys a 14-12 lead at the break but the London 7s defending champions regrouped to take a lead via James Fleming with Scot Wight adding the extras. 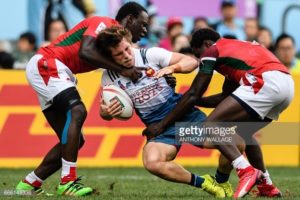 Andrew Amonde’s 41st try of his sevens career was however not enough as the hooter had already gone.

Kenya bagged seven points in Hong Kong to have 47 in total ahead of next weekend’s Singapore Sevens where they go as the defending champions.

Seven points earned in making the challenge Cup final has seen Kenya 7s rise a place in the World Sevens series to eleventh place with 47 points.

Kenya exchanged places with France who dropped to 12th spot with 46 points after adding five to their 41 at the close of Vancouver 7s by making it to the challenge trophy semis.

Returning Dennis Ombachi and Kenya 7s skipper Andrew Amonde were ranked among the best performing players as Ombachi was ranked sixth after clocking 45 points to sit a position and point ahead of Amonde.

Amonde registered 17 tackles, six breaks, two offloads and 20 carries compared to Amonde had 13, 1, 5 and 25 in the mentioned parameters. 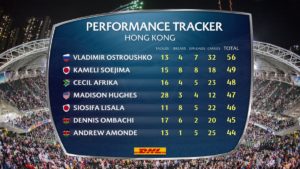 Ombachi was also the best for Kenya in tries alongside Frank Wanyama as each went over the chalk five times.

Fiji won their third Hong Kong 7s title for the third year in a row beating series leaders South Africa 22-0 in the final.

It was Fiji’s first cup in 2016/2017 series as they touched down four times and completing one conversion.

Australia finished third by beating USA 26-19, New Zealand secured a fifth place finish by beating Argentina, Scotland scooped the challenge trophy with a 21-19 win over Kenya while Japan finished 13th courtesy of a 28-21 win over Wales.

Dope Releases You Need to Check Out! Previous post
In Pictures: Blankets and Wine Featuring AKA, Nneka and NU Nairobi Next post

Why Tanzanians Are The Most Streamed Musicians In Kenya