Itumu NjiruOctober 16, 2017Comments Off on Kenya Sevens In Group A Of The HSBC World Rugby Sevens Series Opener, Dubai 7s0

The draw for the first round of the men’s and women’s HSBC World Rugby Sevens Series has been made in London. 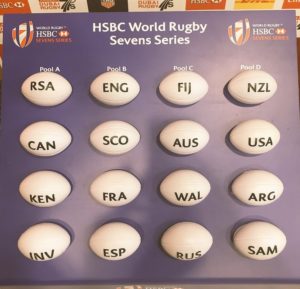 Uganda comes in as an invitational side by virtue of winning Africa 7s and is set to head to Cape Town 7s from Dubai.

England is seeded second to play Scotland yet again with France and Spain being the other teams. Spain is now a core team.

Last season saw record-breaking fan figures for the HSBC World Rugby Sevens Series, after another compelling season on and off the field.

The 2016-17 series, the first after rugby sevens’ Olympic Games debut at Rio, saw the total attendance increase by almost 10 percent, with sevens social media reaching 120 million across multiple languages as the series broadcast to a global TV audience in more than 100 countries.

Next season’s HSBC World Rugby Sevens Series for both men and women will reach a thrilling crescendo in Paris.

The French capital will host the final round of the men’s and women’s series on 8-10 June 2018, as the final men’s tournament switches with the London tournament (2-3 June).

With the men’s series dates already announced, the women’s series gets underway at The Sevens Stadium in Dubai on 30 November this year alongside the men’s competition.

Sydney hosts the second round from 26-28 January 2018 with all men’s and women’s games being played at the Allianz Stadium, before the series returns to the Mikuni World Stadium in Kitakyushu, Japan, on 21-22 April for the third round, a week after the Commonwealth Games on Australia’s Gold Coast.