Kenya 7s Coach: We are Ready For Paris 7s

Kenya goes to the France leg with 57 points sitting eleventh in the World Sevens Series log after Singapore 7s but Simiyu is looking forward to an improvement.

“We have trained very well for Paris and London. We expect that the players will play well  as they did in Singapore, if not better.” 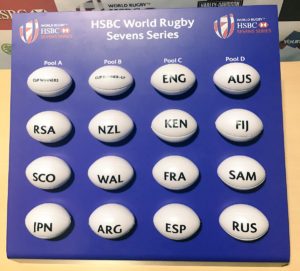 Darwin Mukidza has since been included in the team to Paris and Simiyu remains optimistic he will do better.

“We’ve only made one change. Collins UInjera injured his knee and the doctors are looking at how best to manage his injury. We have brought in Darwin Mukidza who is very good in the attack, very good in open play and the high ball. His physicality is quite good, having had an outstanding season and league final where he led his club side KCB to the  title.”

Sevens series returned to Paris in 2016 replacing Glasgow Sevens as the ninth stop in the 10-leg series which saw Kenya 7s lose 26-7 to Australia in plate semis after going down 24-5 to France in cup quarters.