When famous designers pair with charity organizations with the hopes of using their brand power to bring more attention to an issue or cause; often the feedback is mixed. People either choose to support and accept the designer for their interest, or they attack them for being disingenuous and having ulterior motives. So when Vivienne Westwood chose to pair with the International Trade Center’s Ethical fashion program to create a handbag line made by poor “marginalized” Kenyan women, the debate began. Was the iconic British designer participating in the continued disenfranchisement of Kenyan women? Or was she truly lending her brand power to make real change? I think its important to consider who Vivienne Westwood is, and has been to the fashion industry to begin to answer this question. 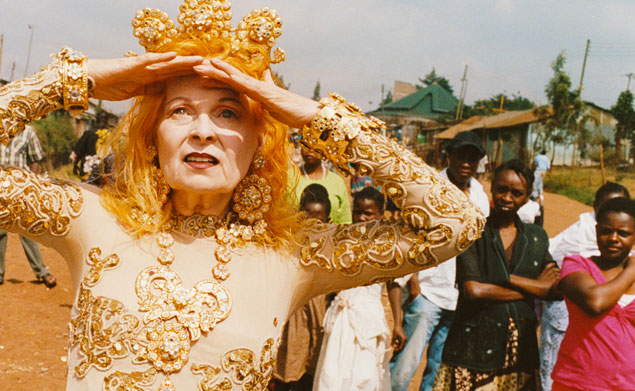 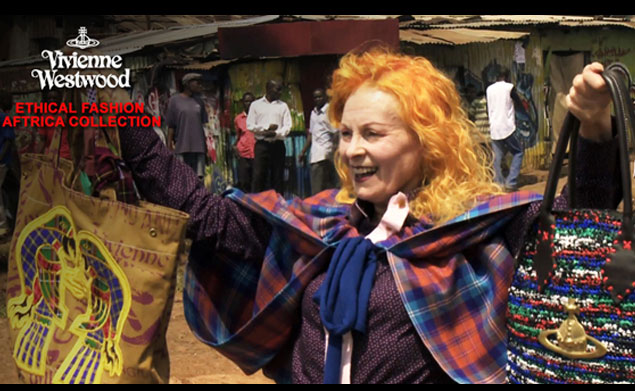 Starting her iconic fashion brand in 1981, Vivienne Westwood has proudly been the face of the outsiders, “others” and outcasts in society since the foundation of her brand. The mother of punk fashion-bringing its unique and quirky elements to the forefront at a time when people like Gianni Versace were sending mega bombshells down the runway and other designers like Oscar de la Renta, Valentino and Ralph Lauren had settled into their iconic styles-she was one of the first designers to draw 100% of their inspiration from the street. Plugging into a sub-cultural phenomenon to “feed” her art. Finding beauty and value in the style of rockers, bikers, provocateurs, and even prostitutes, her persistence in bringing punk fashion to the mainstream paid off in droves. Giving a voice to a culture previously ignored by society, and making her an incredible force within the industry. 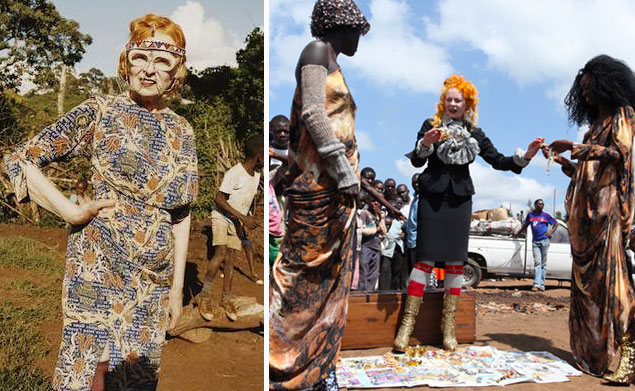 Also known for her political activism, Vivienne Westwood is notorious for taking a strong and vocal position on many issues. Campaigning in freezing temperatures for Nuclear Disarmament at the Atomic Weapons Establishment in 2008 (http://www.vogue.co.uk/news/2008/03/25/westwoods-easter-march). Using her platform as a designer to pair with the British civil rights group Liberty to launch exclusive t-shirts and baby clothing stating “I am not a terrorist, please don’t arrest me” to defend habeas corpus. A right that invokes the spirit of democracy. Writing a manifesto called “Active Resistance Manifesto”, in which she analyzes arts relation to the human predicament. Claiming “We have the choice to become more cultivated and therefore more human – or by muddling along as usual we shall remain the destructive and self-destroying animal, the victim of our own cleverness (To be or not to be)” (Westwood, Active Resistance Manifesto, pg.1). She has even gone so far as to denounce our mainstream culture for its hyper consumerism. Remedying her position as a fashion designer by telling those that can afford her designs to buy them but not buy too much (wikipedia). 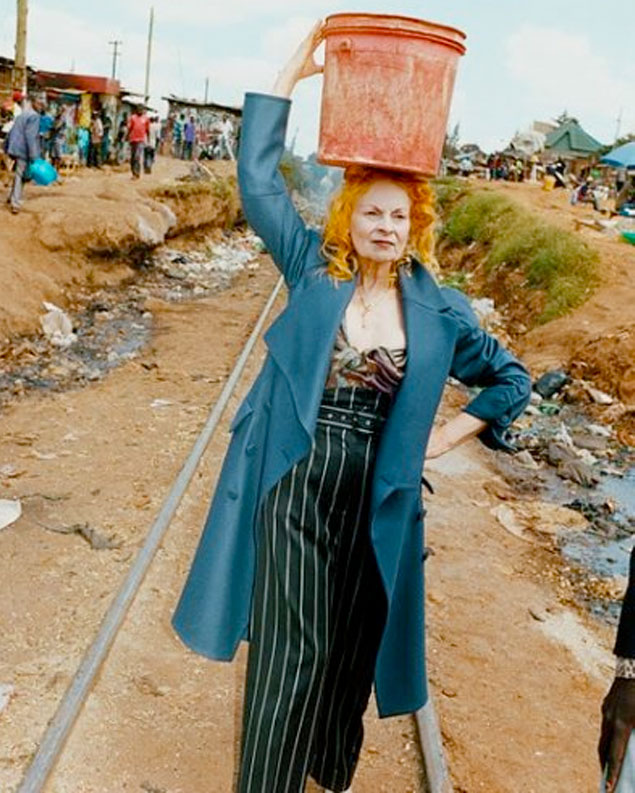 Vivienne Westwood is not a flighty designer, disconnected from the world that has chosen to partner with The International Trade Center’s Ethical Fashion to gain financially from putting poor Kenyan women to work. In fact she is an incredibly aware, cause conscious individual; that has historically used her position to create positive change within the world. She is a staunch believer in basic human rights and civil liberties, and it is those beliefs that led her to seek out a partnership with Ethical Fashion. Ethical Fashion empowers 7,000 women around the world who live in extreme poverty, by giving them the skills, tools and resources to better their lives. The program provides these women with jobs, that allows for financial independence for their families and eventually can economically re-invigorate the communities they live in. Rather than looking at this partnership with criticism and skepticism, consider Vivienne Westwood’s position within fashion history, and her record as a political activist.

The women creating her bags are learning valuable skills that will be passed on to the next generation of Kenyan women; bringing their communities together as people are given a chance at sustainable financial independence.As it states on Vivienne Westwood’s website, “THIS IS NOT CHARITY, THIS IS WORK.” She believes that charitable handouts can leave people dependent rather than empowered. So from the beginning she has been clear that her partnership is truly about establishing a strong foundation that will lead to self reliance in the future. Now that the bags are being made, do your part as a consumer to make sure that these communities can sustain themselves. But as Vivienne Westwood would say, “buy some but not too much.” 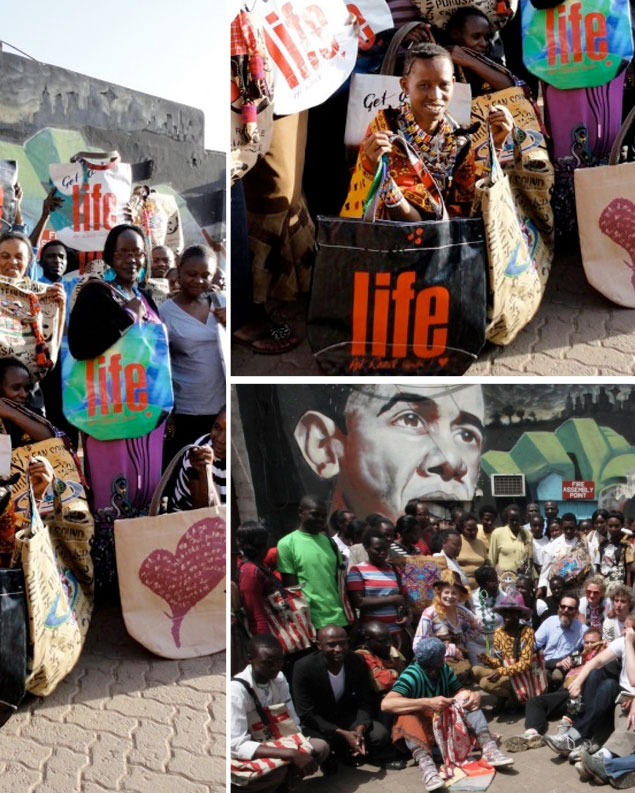 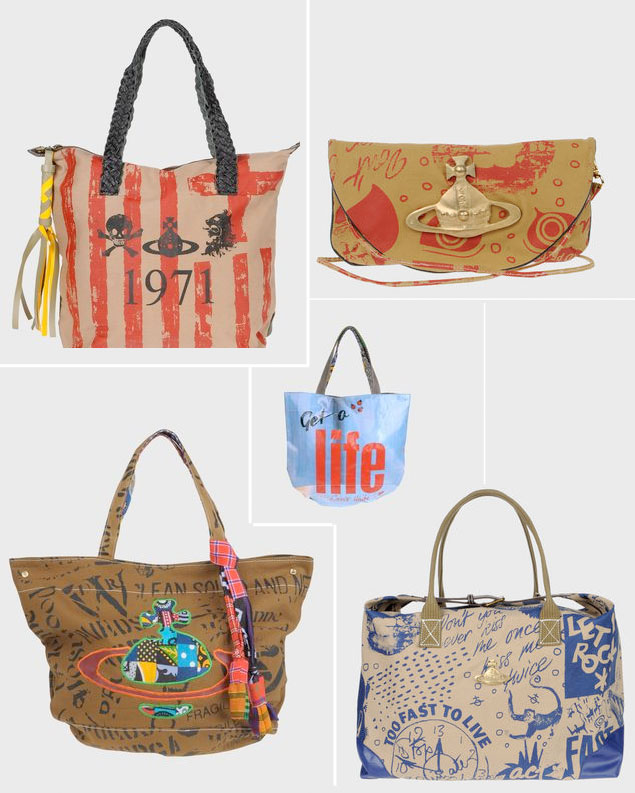 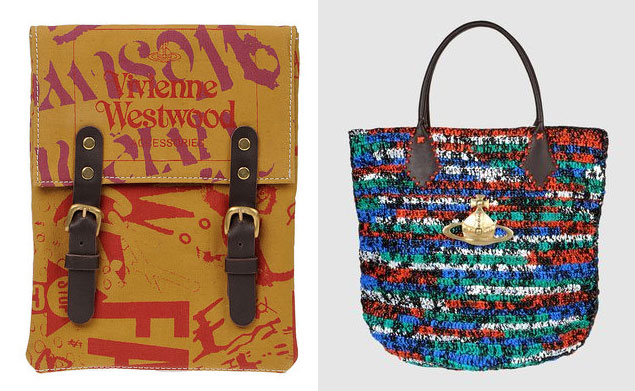 The bags are made from 100% recycled materials found all over Nairobi.  Visit her store at YOOX or VivienneWestwood.com.

Kenyan Online Thrift Stores You Need To Know About

11 Fashion Brands for the Kenyan Woman Who Loves Herself