One on One with Deejay Kace

Lizzie FaridaJuly 17, 2017Comments Off on One on One with Deejay Kace0

We interviewed Deejay Kace a few years ago, and over the years he has gone on to dominate anything he puts his mind to. Deejay Kace, is quickly making a name in the event scene. He works with Kenya Nights who this year alone have brought in Mi Casa, Felix Buxton of Basement Jaxx and of course the show of the year Diplo and Walshyfire. On his own, his name guarantees a successful gig with events such as ‘Kace and Friends’ always a roaring success.  We caught up with him and picked his brain on how he has managed to not only dominate as a DJ but crush it as a major player in the event scene.

What is your role at Kenya Nights?

The official title is head of logistics. Basically when Rizwan  (creator of Kenya Nights)  puts together events or books an artist, when it comes down to making sure everything runs smoothly on the ground; like giving him advice on what direction to go – I’m like his right-hand man. I’ve been doing that for the last 3 or 4 years.  We’ve done a lot of good things together

How did Diplo come together?

The last time Diplo was here he had such an amazing time, I think in 2014. Ever since that show, he has wanted to come back. So every year there’s been communication back and forth between him, his management and us about coming back to Kenya. At one point his management changed, other times he’s literally booked like an entire year because he is such an in demand and busy guy. So finally, the whole reason we were able to get him back is he put together an African tour so it made sense. 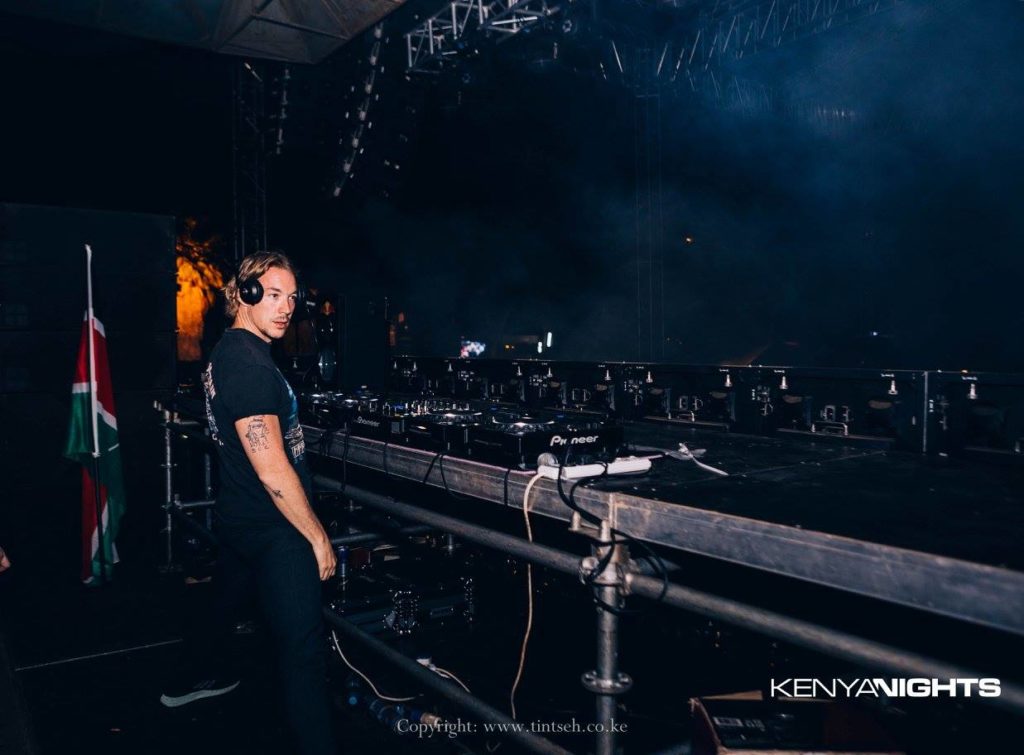 How did you get to host your shows at Unverified Radio?

Getting into Unverified… it’s an online radio station and the people who started it had heard of me  so they approached me independently . it’s interesting as much as online radio doesn’t reach out in the same way as regular radio, in that you can’t just get in your car switch to a frequency and listen to it, you have a much wider scope of an audience – there’s a bigger international fan base.

Radio is funny because you can’t really tell who is listening like in the club you can physically see everyone who is bumping to your vibes, on radio you can never truly be sure. And then I get messages listening from Saudi Arabia, listening from the US, listening from Afghanistan, so yeah its cool. I’ve been there for a year and a half pretty much.

Why did you create Kace and Friends?

Kace and Friends is a concept I tried back in 2013 when I was still coming up. Initially, it was more of a ‘just get a bunch of guys that I’m cool with together and just have a dope party’. But what I’m trying to grow it into now is since I’ve gotten much further in my career -I’m a lot more established than I was then – I’m trying to use my name to give other guys a platform because for the last three Kace and Friends, it’s predominantly been up and coming DJs or DJs that I’m trying to help out. Like they’ll be one or two guys that are established because they are my homies. I want to party with them, I like what they are doing, but mostly I’m trying to give guys a platform to jump up.

I’ve been fortunate enough to become one of the favorites at Alchemist, we have a very good working relationship. So when they give me the venue for the night I’m very well aware that that’s a dream venue for a lot of people to play. It’s a very good platform  to get started so if I think you’re good and I want to show you to the world I’ll give you the opportunity that would otherwise take a lot longer to achieve. That’s the whole reasoning behind it for me. 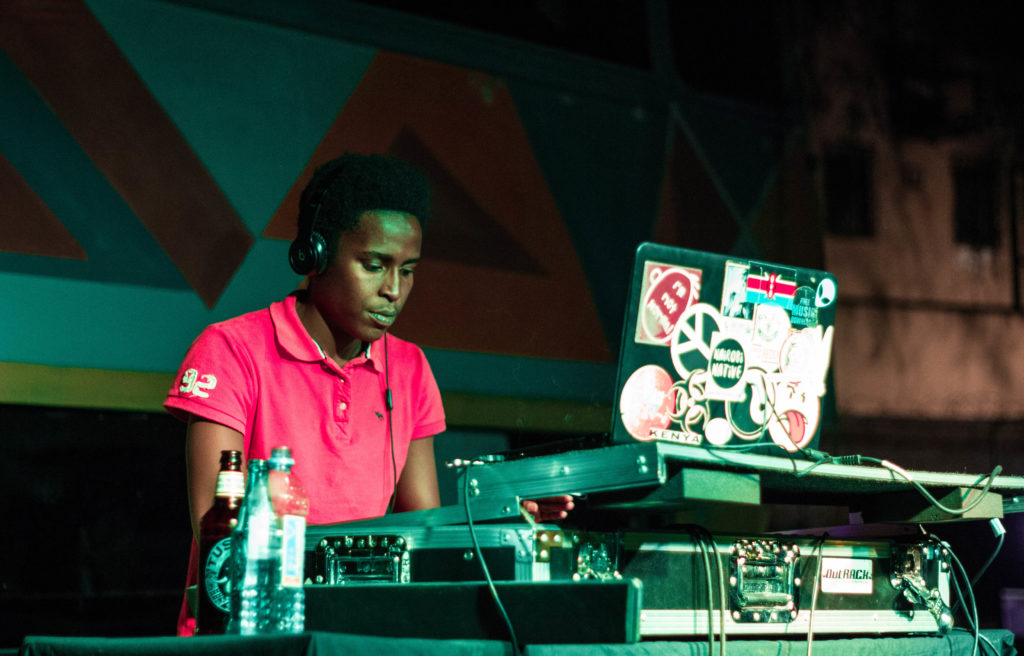 DJ Koome at Kace and Friends

How did you connect with Nairobi horns project and the  Rooftop sessions with Mackinlay?

Mackinlay reached out to me a while ago because he had this idea of a DJ trumpeter duo. He actually tried working with several other DJs in the past but it kind of didn’t work out. So when he hit me up we got to work, we would rehearse on occasion. We did a few shows together first back in Juniper before it became J’s and had  a really really positive response so we kind of wanted to take it to the next level. 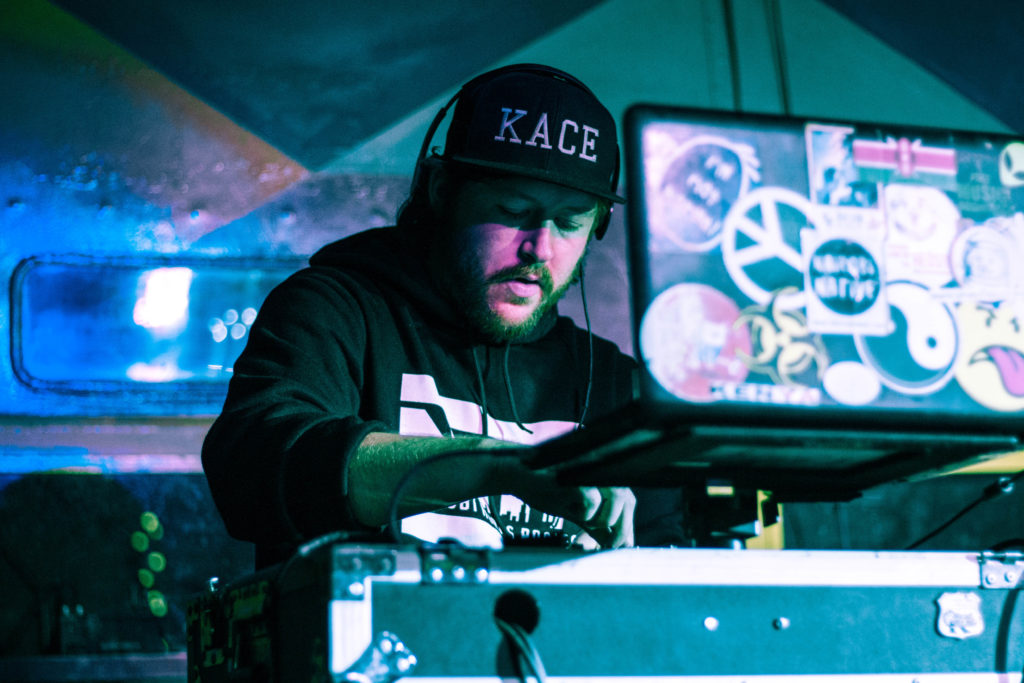 So it was a process that was a few months in  the making: we had to find a videographer, find the right location and  we shot the video, now from that video we have Hennessy working with us exclusively.

All-star DJs was a project I started way back in the day like in 2012. It was just a collective, we tried to start one of those units like Homeboyz and Code Red and Spin Cycle. We tried doing our own thing like that but then we never really took off too much because… what I’ve come to learn now is the real strength of a DJ unit is when everyone in that unit is independently doing really well and pushing forward so that the brand is working for you and you’re not working for the brand.

What happened in that All-Star DJs unit is that one or two of us were really pushing to make it work and the rest of the guys were just letting the others lead and relying on All-star DJs to get them gigs. Whereas the strong units you see now everyone is getting gigs on their own but you’re associated with that brand … like when Epic Nation started it was big because you had Crème there, you had Hypnotic there, you had Protégé so they are all  doing big things on their own and now they came together so the brand was working for them, not the other way around. That was one of my failed ventures.

How do you reckon the event scene is evolving in Kenya?

Back in the day, when I was still in high school, when Shaggy came to Kenya, the entire country went mad because that was the first big mainstream international artist and then a few years later, Sean Paul came. In the reggae industry Joseph Hill and Mighty Culture came the same year, then one or two years later Richie Spice shows up. So we had this thing where we had to wait a long time before anyone of international stature came.

Fast forward to this year we got Diplo, then we had Omarion, then we have Jidenna, we had Jason Derulo in between, we had Damien Marley, Wiz Kid is coming, Mi Casa was here the other day, Patoranking was performing at Kiza last weekend…You can’t even keep up.

All of a sudden everyone is coming to Kenya and now it’s interesting because, I mean I’m not trying to throw shade at anyone, but if Omarion had come to Kenya four or five years ago, then everyone would have been there, or same with Damian, same with all these other artists. But now that all of these artists are coming guys are like ‘wait should I go to this international show or should I go to this other international show?’ They have choices.

How about the local scene?

And it’s not only international shows, its local events, it’s been growing. We need a little more of an injection in terms of the local music scene, because our local artists aren’t getting as much hype as our international artists, but it’s changing because, you see festivals like Blankets and Wine really pushing for producers and the NU Nairobi movement.

Those guys are getting a lot more recognition a lot more hype. Really talented artists like Fena who would put out one song in a really long time are now putting out a lot more work and its very good quality work so there’s more attention being put there. She was doing a sort of club tour and people seem to be more willing to invest in music because the quality both internationally and locally is drastically improving.

Even the guys who do really niche music…like Tetu Shani, Makadem are getting traction. People are starting to diversify what they listen to…it’s so much more accessible it’s a lot easier for the audience to figure out what their sound is and easier for them to find related artists in the country

Do you have a management team that helps you stay on top of things, your DJ career and everything else you have going on?

I have a PA and I have people who give me social media advice but in terms of a manager no. In terms of managers it’s a profession that lacking a good amount of people in Kenya. I feel like most manager’s act more like booking agents… Realistically if you’re taking 5 to 10 percent of my profit just to handle some phone calls, am I really getting enough value for what your taking? If I was to get a manager they would do it all: book gigs, they would get me photo shoots, radio interviews, for a steady fee so for me the only thing I concentrate on is playing music. There’s a few managers though, like the guy who is working with Gmoney and Andre who I might be interested in working with in the future because it does get a lot over time.

Any future projects we should know about

I’ve decided I want to get into production. So I’m in the process of getting the right equipment together, people have been very receptive to the news. There’s more than enough people willing to show me how to go about it so that’s the next big plan. Because you don’t see anyone in the DJ 100 that only DJs they are also producing. It’s realistically the next step that I can possibly do to get to another level.