Shrap Nite Is Back! Here’s All You Need To Know

Maxwell NyotaJanuary 24, 2018Comments Off on Shrap Nite Is Back! Here’s All You Need To Know0

The trap scene in Nairobi is turning out to be a formidable force and if you think it is a gimmick, check out your favorite Hip Hop artists’ recent catalog, you will not miss a trap sound. Trap is permeating the media and now we have themed nights just for that.

Former Jump Off Freshmen ADF Family has a themed night dubbed Shrap Nite that caters for the trap-stars in the city. Shrap stands for sheng, trap and pop music all in one. It’s a night filled with performances from established and upcoming music artists in the entertainment industry. 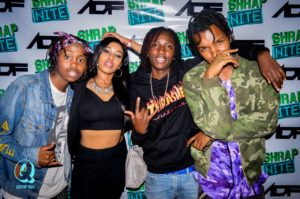 Shrap Nite turned one on the 16th December and they had performances from Steph Kapela, Barak Jacuzzi, Rajville7, Moonboy Ke and many more.

The music policy for that night is ShrapSoul a subgenre just like Trap Soul. Dress code will be Red and White and the cover charges will stand at Ksh500/=.

If you listen carefully to the new wave of Kenyan Hip Hop Squares, it’s filled with kids who run a parallel scheme as that in the USA, from the sound, production, delivery and somehow content only customized to fit the KE narrative.

It might take time to blow up but it might be the biggest underground movement at the moment so do not sleep on it.