Mr. Eazi is one of the biggest names in showbiz not only in Africa but internationally. The Nigerian superstar has been in the country for the last couple of days to launch his new project dubbed ‘emPawa’ – an initiative which is aimed at showcasing Africa’s emerging artists to the world. Eazi also gave a treat to his Kenyan fans by launching his new mixtape titled ‘Life Is Eazi-Vol.2: Lagos to London’ here in the 254.

We had an exclusive chat with the man himself! Check it out below:

What inspired the ’emPawa’ initiative?

I wanted to give back and this was a perfect way. Going through Instagram videos I discovered there was so much undiscovered talent in Africa. I decided to push through with the idea and it worked out, I got sponsorships and I’m looking to do this.

How many countries will participate in the project?

We have Nigeria, Ghana, Uganda, Kenya, Tanzania, Rwanda, Burundi and we are hoping to get more on board and so far it’s been a good run

Why are you passionate about African talent and what motivated you to spearhead such a big project?

All it took for me to start my career was a video that cost me $1000; a career that has allowed me to tour the world, own a business and employ over 100 people in-house and outhouse. I have funded four videos for artists in the past two years which created immense opportunities for them. One of those artists was recently nominated for a BET award so this ultimately was the real motivation behind this course – providing opportunities for emerging artists as well as mentoring them to have the knowledge to become music entrepreneurs like myself.

How many stars do you plan to scout in each country?

I was thinking of ten to fifteen in each country hence a hundred of them across African countries.

What plan is in store to launch this careers?

Candidates will submit their work online via Instagram to be considered and evaluated by industry experts. The deadline for submissions is Saturday 15th December 2018. We will then pick 100 artists who will each receive a grant of 3,000 USD. The funding will be used to produce 100 music videos with a production crew across Africa. From the finalists, 10 will be picked to fly to South Africa and partake a 3-week incubator programme mentored by popstar Raye and renowned producer Diplo amongst other key names within the industry. Candidates will also have the opportunity to record their song in a state of the art recording studio and will shoot their video with a professional film crew.

You recently released your new mixtape ‘Life Is Eazi-Vol.2: Lagos to London’ what are some of the challenges you face while making this masterpiece?

I’ll say mixing and mastering. Usually, I don’t care much about the mastering but this time I was very keen on the standards I was setting out there. That gave us a very hard time but am glad we hacked.

Which is your favourite song in the Album?

[Laughs] I like ‘Chiki Kori’ it’s such a fun and cool song. Its playful nature made me fall in love with it.

Which Kenyan artist are you planning to work with?

Roza for now and the finalist of the ’emPawa’ Initiative. We don’t have many female superstars in Africa and I have purposely decided to really work with female artists to increase their number in the industry. I’ve also worked with Lady-Donli who is now one of my favorite and she has an intro on my mixtape.

Now that you are an accomplished artist, who is your role model of all time?

Jay z. Reason being he has done it all.

Beyonce and Rihanna who would you collaborate with?

[Hahahahah] That’s a hard one. I think I’ll go with Rihanna.

In Memoir, Michelle Obama Reveals She Hated Her Visit To Kenya  Previous post
Dope Events To Help You End 2018 In Style! Next post 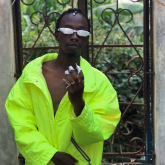