Details: Here’s How You Can Catch ‘Supa Modo’ On The Big Screen

Della MbayaApril 9, 2018Comments Off on Details: Here’s How You Can Catch ‘Supa Modo’ On The Big Screen0

The Nairobi Film Festival came and went – and judging by the commentary online in the wake of it all, many who may have wanted to catch some of the 254’s finest film offerings, were caught unawares.

That’s perhaps a story for a different day. 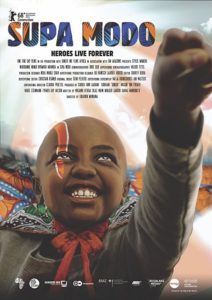 One of the actual stories that emerged was just how good one film in particular had been received by audiences that attended screenings.

Supa Modo tells story of a young girl whose dream of becoming a superhero is threatened by terminal illness, inspiring her village to rally together to make her dream come true.

Check out the trailer:

In case you haven’t had the chance to watch it yet, here are the listings for the week ahead:

#SupaModo will be showing for another week. Show venues and times here. Show up, show love. pic.twitter.com/cx6TsKwLPU