Day 1 Goes Horrible For Kenya 7s At The Cape

Itumu NjiruDecember 11, 2017Comments Off on Day 1 Goes Horrible For Kenya 7s At The Cape0

Kenya 7s has had a bad day at the Cape Town 7s in South Africa losing two matches to drop to challenge trophy and miss cup quarters on Sat December 9, 2017.

Kenya 7s started the day by blowing a 14-0 lead at the break over France only for the European side to score three unconverted tries to win 21-14.

Shujaa went down 26-7 to hosts South Africa in their last match. They beat Russia 34-0 in the second match meaning they needed to win the last match and hope Russia upsets France but cases went negative.

A highlight of the win over Russia was after a dominant first-half performance, the Kenyans maintained their momentum – adding three additional tries through Daniel Sikuta, Arthur Owira Ochieng and Samuel Ngethe Njenga.

After trailing 14-0 at half-time, three tries in quick succession from Jean-Baptiste Mazoue, Jean-Pascal Barraque, and Stephen Parez sealed an impressive victory for France.

The first half was a hard-fought stuff between the two African sides but it’s the home team who took the lead via two individual tries from Ruhan Nel and Kyle Brown. William Ambaka Ndayara hit back for Kenya.

South Africa ran out comprehensive winners in the second-half, with Philip Snyman and Seabelo Senatla adding their names to the score sheet.

The home nation finished top in Pool A to advance to yet another Cup Quarter-final in Cape Town.

Kenya 7s will open day two against Samoa at 11.36am in the challenge trophy quarters before Scotland takes on Spain, Wales plays Russia and Australia plays Uganda. 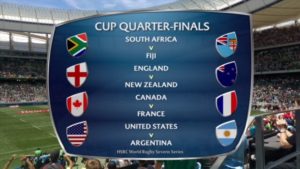 As Kenya 7s battles in the bowl, USA if high-flying in cup quarters where they will play Argentina as Canada takes on France, England plays NewZealand and Fiji plays the hosts.