#BBQLiveKE Wants YOU To Share A Stage With Wizkid

Della MbayaJuly 12, 2017Comments Off on #BBQLiveKE Wants YOU To Share A Stage With Wizkid0

Hopefully, you have at least an iota of performance talent.

BBQ have initiated a competition that might be a roaring success – or will (most likely) allow us to laugh someone off the stage.

Unless you’ve been living under a rock for the past couple of months you’ll know that Wizkid will be performing in Nairobi at the KICC in exactly ten days time – alongside acts such as Nameless, Fena, Willy Paul and Gin Ideal.

And they want you to get your moment under the lights: all you need to do is show and prove what you are made of. It’s known as the ‘Daddy Yo’ challenge, based off his tune of the same name. Do what you (hopefully do) best, and show off your moves. Record and tag @BBQLiveKe – if you or your crew shines, you might just get your big break.

The “Daddy Yo” hit maker, who really saw his stock rise following collaborations with Drake and Chris Brown last year, will be performing at the 14th Edition and 4th Anniversary of the event sponsored by Ciroc.

Other acts who will grace the event’s stage will include DJ Joe Mfalme and DJ Exclusive. 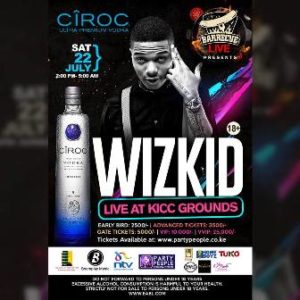 For more information on what should be a pretty epic night, hit up www.partypeople.co.ke

Catch you at the KICC!