When Troy White was 19 and about to leave for college, his mother told him: “Don’t be a person who sits around and wonders ‘what if.’”

Fast-forward to 2017 and it’s clear that White has followed his mom’s advice.

At 52, White lives in Nairobi and works as the managing director of Temple Management, Africa’s first full-service entertainment agency representing pioneers in numerous creative fields, from underground afropop to basketball. He joined the burgeoning company late last year and quickly became in charge of recruiting and promoting new talent across East Africa, recently making headlines for signing the likes of Blinky Bill and King Kaka.

But Temple is just one of many impressive feats on White’s laundry list resume.

A self-described “entertainment impresario,” White grew up in Philadelphia and scored his first entertainment industry job – as a national marketing manager for Epic Records – just two days after graduating from Howard University in 1988. 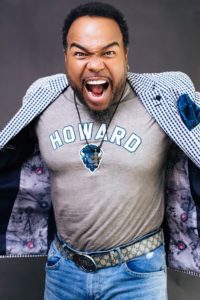 “It wasn’t by luck, but by hard work and blessings,” White told KenyanVibe on Tuesday, speaking from his home in Nairobi.

After Epic, White moved on to Sony and Def Jam Records, representing legendary artists like Michael Jackson, Public Enemy, Beastie Boys and the Rolling Stones, among many others. Asked to share a particularly memorable experience from those days, White demurred with a chuckle.

With those wild and productive days behind him, White went on hiatus in 1998. He eventually transitioned into politics and utilized the social tact he had picked up from the entertainment industry to help shape campaigns for Barack Obama, Hillary Clinton and three-term New York City mayor Michael Bloomberg.

Nonetheless, White’s passion for entertainment management never faded. So when his wife got a job offer in Kenya in 2014, he saw a renaissance opportunity.

“I told her, ‘babe, what I do I can do anywhere in the world,’” White said. “So we packed up our kids and moved to Nairobi.”

The family of four settled in Spring Valley and White, who has always been an avid sports fan, began coaching youth basketball in the Kibera and Mathari slums. He instantly fell in love with the city, dubbing it “the dopest place on earth.”

“I got a deep-dive into the culture,” he said.

In October last year, White was introduced to Temple Management. The budding agency, headquartered in Lagos, Nigeria, was looking to open an East Africa bureau in Nairobi and asked White to interview for the managing director position after getting word of his reputation as an entertainment industry aficionado. White accepted and was hired on the spot.

“It was freaking magic,” White said.

Temple is a rather unique agency as it does not restrict itself to one particular creative category, proudly stating on its website that it represents “acclaimed and pioneering figures in every existing, new and emerging area of entertainment.” 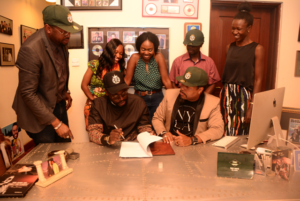 White, surrounded by his staff, sits down with Blinky Bill during signing ceremony in July.

“We don’t just sign anyone; we sign artists with their own individual sounds and perspectives,” White explained. “The general public just hasn’t heard of a lot of them – that’s where our job comes in.”

And White’s sentiment seems to reverberate with the artistic community in Kenya.

Blinky Bill, the ingenious ex-front man of Just A Band, praised Temple’s commitment to progressive, independent artistry during a signing ceremony in July.

“It’s really nice to be working with a team that will ensure that the album goes all the way to the top,” Bill said, referring to his upcoming solo project.

Going forward, White says the East Africa bureau will focus on expanding into Tanzania and Uganda, in addition to further developing its presence in Kenya.

Despite a prestigious and at times stressful career, White comes off as an extraordinarily humble man whose contagious smile can lighten up any room. Asked about what keeps him centered, White gave a nod to Nairobi and its “unbelievable energy.”

“What I love the most is the promise of this city,” he said. “I wake up every morning feeling like I can do life-changing things. If you want to be anything here, if you have the hustle and the will power, you can make it happen.”

Nadia Mukami Comes Clean On Being A Celebrity Mom and Challenges