Why April Is The Month For Jazz Lovers

Della MbayaApril 17, 2018Comments Off on Why April Is The Month For Jazz Lovers0

The weather is a little all over the place – which makes for a perfect live music setting. The experience of being a part of live instrumentation almost demands for an eclectic, unpredictable environment.

It’s Jazz month in the 254, and the Nairobi Horns Concerts are unveiling “Afrika Unite” – a collaboration with Africa Plus from South Africa.

After making a connection at the Safaricom International Jazz Festival and several conversations later, the two bands come together with the purpose of sharing musical ideas and experiences, creating original content, joint performances and enhancing collaborations.

This has been billed as a one-of-a-kind musical experience for the avid lover of good music. 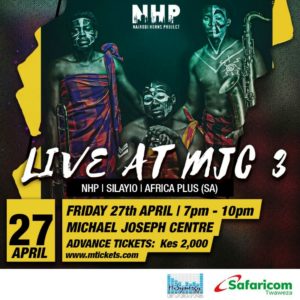 On April 27th, NHP goes back to MJC for a night of high-octane jazz. This time featuring award winning vocalist Silayio, who is fresh from her forays on The Voice Holland and a new release of her song Gimme More Love. Silayio will be performing in collaboration with Nairobi Horns and this is a musical merger worth watching.

Nairobi Horns will also be collaborating with South African artists: Drummer Lelo Mazibuko and Pianist/Producer Luyanda Madope who bring a wide selection of styles, tastes and eclecticism to the mix. 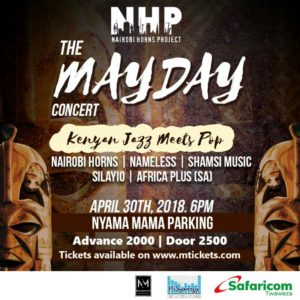 The May Day Concert is a fusion first time a fusion between Kenyan Pop, Jazz, and African Rhythms. Featuring performances by Nameless, Shamsi Music, Lelo & Luyanda and Silayio.

Shamsi Music, who were fellow performers at Safaricom Jazz 2017 have made a name and a sound as an engaging live act in Nairobi and beyond.